Due to ongoing restrictions on in-person gatherings, the Plymouth Antiquarian Society’s Annual Meeting will be held virtually via Zoom this year. Authorization for remote-only meetings has been given to nonprofit organizations by Governor Baker and the Massachusetts legislature.

The program will begin with a 30-minute business meeting, featuring reports from President Virginia Davis and Executive Director Anne Mason, and concluding with the election of officers and trustees. Click here for the list of nominees. Members of the Plymouth Antiquarian Society will be asked to participate in the election via the Poll feature in the Zoom Webinar platform. Detailed instructions will be provided to registered attendees. The meeting will be followed immediately by a special presentation on Plymouth’s Captain Nathaniel Spooner (1758-1826).

This event is free and open to the public.

Registration is required by Friday, November 20th. To register, please use this online form.

If you have any questions, please email Executive Director Anne Mason or call 508-746-0012. 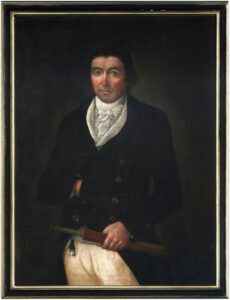 As the ward of his uncle Ephraim Spooner, the Plymouth shipmaster Nathaniel Spooner (1758-1826) was raised in the house at 27 North Street now preserved by the Plymouth Antiquarian Society, whose rich historical collections include Nathaniel’s portrait and spyglass.

In the late 18th and early 19th centuries, Spooner skippered multiple voyages from Massachusetts to Spain delivering cargoes of cod and other foodstuffs to hungry Iberian consumers on behalf of his employers, the Plymouth merchants Thomas and William Davis. Despite the disordered international situation at the time, Spooner managed to complete most of his voyages without undue incident.

In August of 1803, however, Spooner’s luck ran out. While departing the Spanish Basque port of Bilbao, his schooner the Governor Carver was intercepted on suspicion of carrying specie, a serious crime at a time when the export of gold and silver by foreign traders was generally prohibited by law.

The story of the Captain’s hair’s-breadth escape from justice and the legal machinations that followed is now being pieced together from surviving manuscript records by our speaker, independent scholar Donald C. Carleton, Jr., in collaboration with Bilbao’s Itsasmuseum (maritime museum) and Dr. Xabier Lamikiz of the University of the Basque Country. Dr. Lamikiz will be joining our Zoom session from Vittoria-Gasteiz to offer commentary on Carleton’s presentation and to share his perspectives and insights into Spooner’s Bilbao adventures.

Donald C. Carleton, Jr., is an independent curator/researcher and a nonresident research associate of the Itsasmuseum Bilbao. He trained at Harvard and Brown, where he earned his MA in history in 2008. He is currently developing a public history project exploring New England’s multifaceted connections with the Iberian world with a focus on the North Shore’s nearly two century-long trading relationship with the Spanish Basque port of Bilbao. In 2013 he curated the commemorative exhibition 1763: A Revolutionary Peace at Boston’s Old State House Museum.

Xabier Lamikiz is Associate Professor of Economic History at the University of the Basque Country. He received his Ph.D. from the University of London in 2006. Dr. Lamikiz’s publications include Trade and Trust in the Eighteenth-Century Atlantic  World: Spanish Merchants and Their Overseas Networks (2010) and articles on early-modern Spanish trade and shipping in the International Journal of Maritime History, Hispanic American Historical Review, Colonial Latin American Review, and Journal of Iberian and Latin American Economic History.