Part 1 in a special series on the Pilgrim Breakfast

The founders of the Plymouth Antiquarian Society sought to preserve not just the buildings and objects of the past, but also the traditions and skills of everyday domestic life. The Harlow Old Fort House, purchased in 1920, became their primary venue for practicing and teaching the household industries of colonial New England. A focus on open-hearth cooking led the Antiquarians to host food-related events for the public.

The earliest recorded Pilgrim Breakfast at the Harlow Old Fort House was in 1933. That year’s annual report on the Society’s activities included a very brief mention of this special event: “A delightful old fashioned Sunday morning breakfast was served at the Harlow House Oct 1st, after which the house was closed for the season.”

The Breakfast became a fixture in the Antiquarian Society’s annual calendar. By 1949 the Antiquarians established a schedule of holding two Breakfasts each year, on the Sundays closest to July 4th and Labor Day. PAS members prepared the meal, which costumed volunteers served to the public both inside and outside the historic house. The menu from the beginning featured fishcakes (or “fishballs”), baked beans, and cornbread.

Rose T. Briggs, who served as the Assistant to the Society’s Directors, used the Breakfast as an opportunity to showcase the traditional crafts that the Antiquarians demonstrated throughout the year at the Harlow House. Their innovative course for adults, “Household Arts of the 17th Century”, drew national attention. Held every July between 1935 and 1941, it featured hands-on lessons on preparing flax and wool, spinning, dyeing, weaving, candle making, and open-hearth cooking, supplemented by lectures on architecture, furniture, clothing, and by trips to other historic houses and museums.

The Pilgrim Breakfast was a family affair; the children of Antiquarian Society members were recruited at an early age to dress in costume, sell “tussie mussies” (small bouquets), and serve the guests. In the 1930s and 40s PAS member Souther Barnes and his siblings (Brooks, Mercy, Parker, and Philip Jr.) would help their mother, Mercie Hatch Barnes (1899-1992), cook inside the Harlow House. “I kept the fire going and she cooked the fishballs, which are like the fishcakes they serve today. She fried them by the spoonful in hot fat. That fire was so hot her face would be beet red,” Souther recalled in an interview with the Old Colony Memorial in 2019. 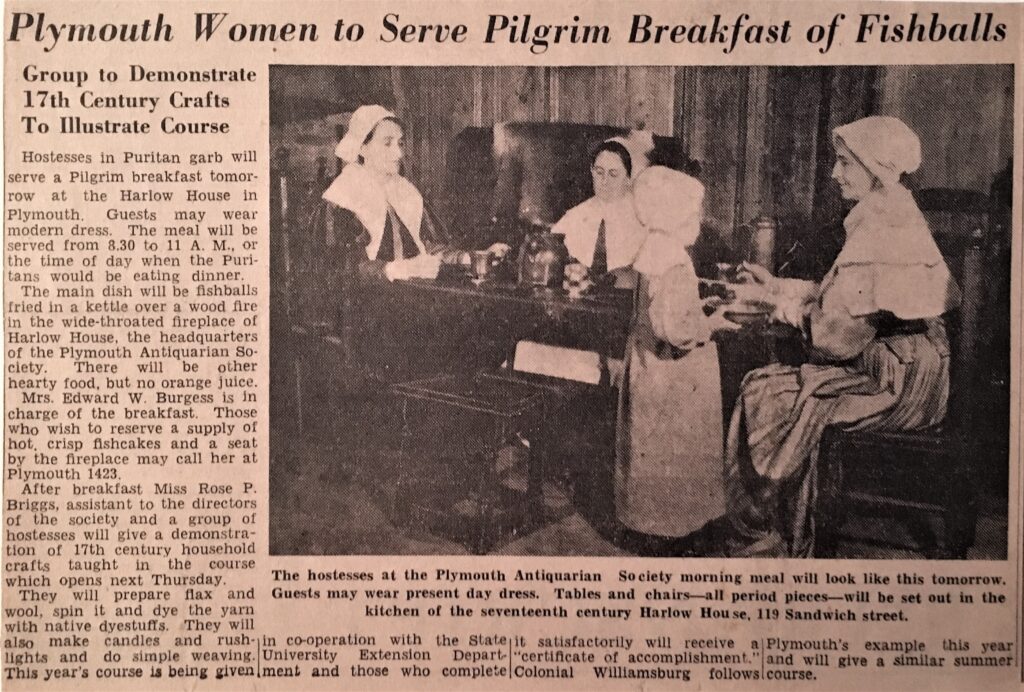 This article from the Boston Evening Transcript of July 1, 1939 reassured potential guests that they “may wear modern dress” to the Pilgrim Breakfast. (PAS Archives) 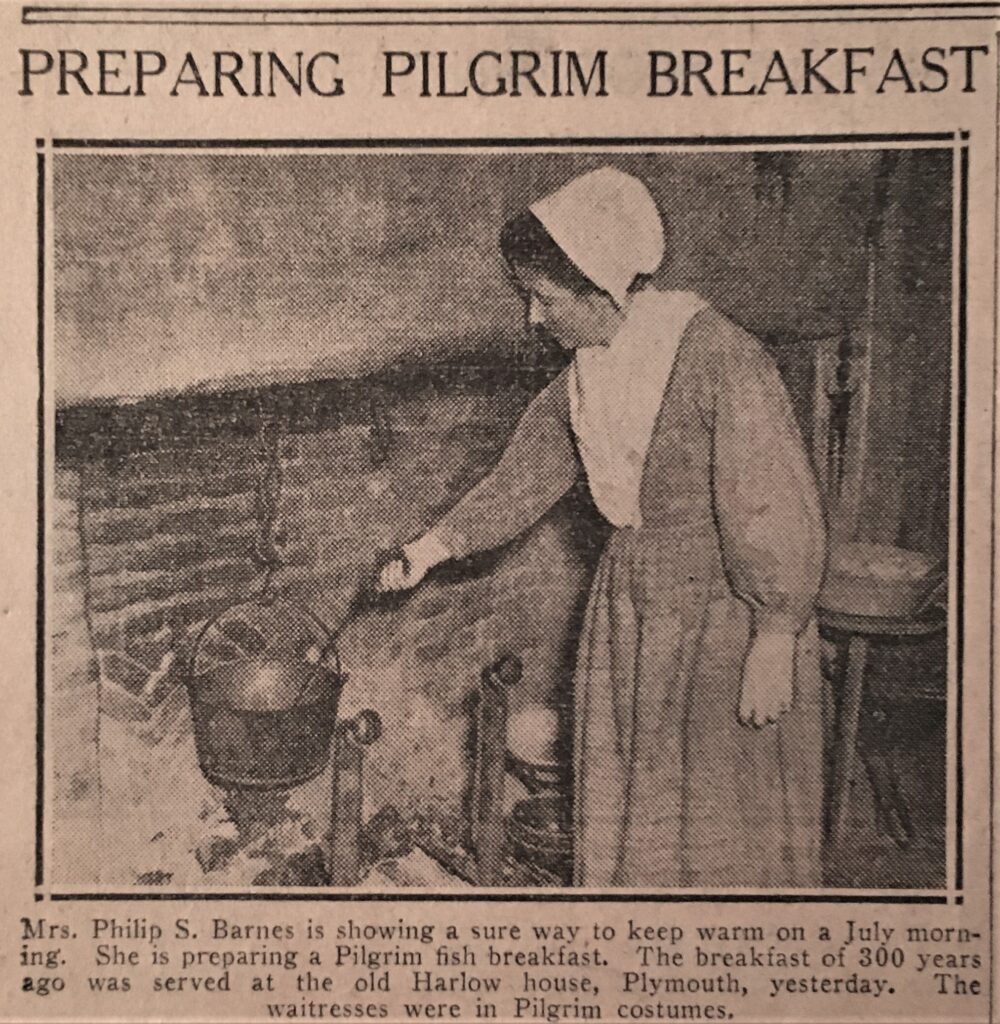 Newsclip featuring a photograph of Mercie Hatch Barnes “showing a sure way to keep warm on a July morning” while cooking over a fire at the Pilgrim Breakfast, ca. 1940. 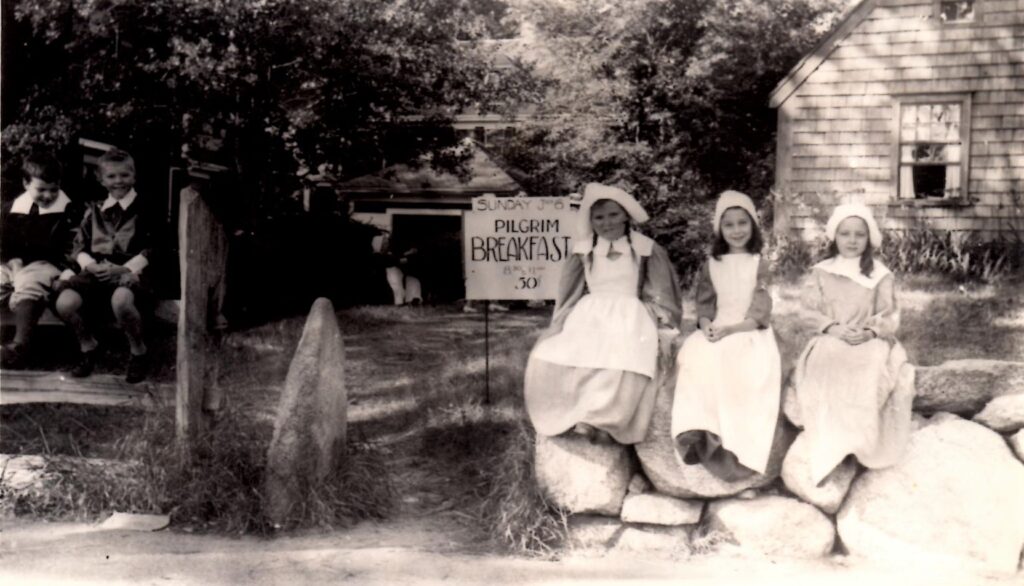 Souther Barnes (second from left) and his sister Mercy Barnes (third from left) greet guests to the Harlow Old Fort House for the Pilgrim Breakfast on July 6, 1941. The cost was only 50 cents. 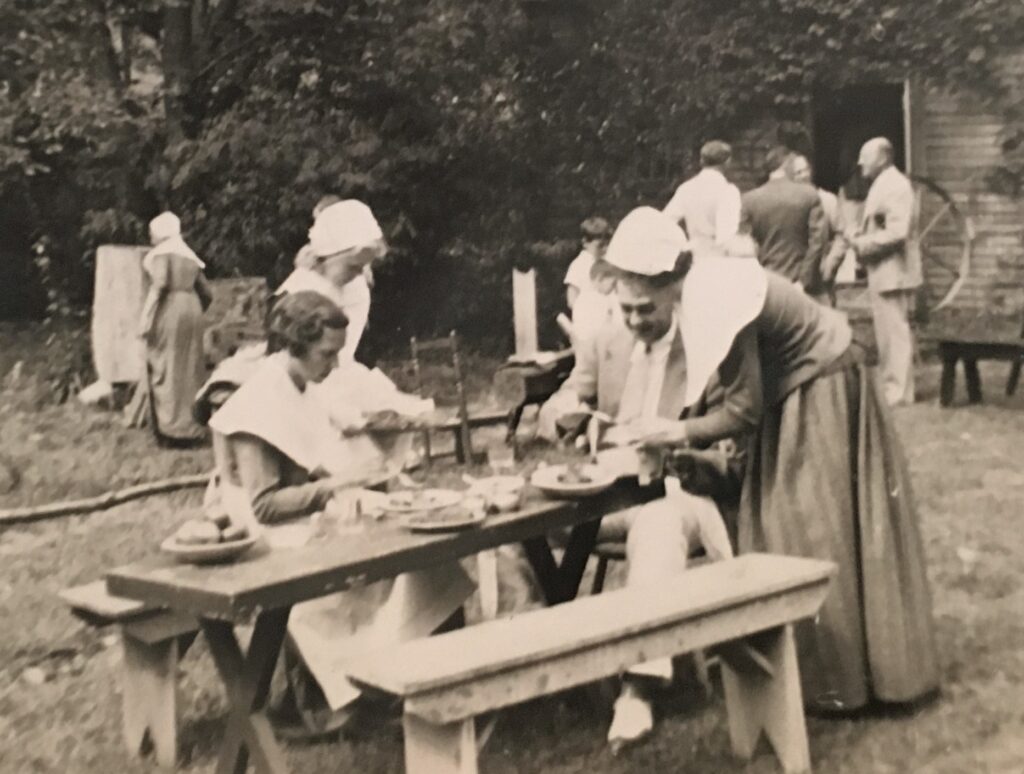 This snapshot shows guests being served on the Harlow House lawn, ca. 1940.

One comment on “The Origins of a Plymouth Tradition”