Part 4 in a special series on the Pilgrim Breakfast

No series on Pilgrim Breakfast traditions would be complete without a few cooking tips from Rose T. Briggs. (We mentioned her in our first post and you can see a photograph of her in our third post.)

Rose Thornton Briggs, daughter of George R. and Helen Taber Briggs, was born in Plymouth on May 26, 1893, in what is now the Mayflower Society House on North Street.  She lived most of her life at Indian Brook, her parents’ home in Manomet, where her father had built many acres of cranberry bogs. Her mother helped found the Plymouth Antiquarian Society in 1919 and served as its President (1927-29). Rose was Assistant to the Directors and later Curator of the Antiquarian Society (1932-73). She was also active in the Pilgrim Society, serving as its first Director. She was considered a national authority on 17th-century Pilgrim life and an expert in historic clothing. She worked tirelessly to understand the past and to preserve Plymouth’s history. On September 23, 1981, Rose T. Briggs died and was buried at Vine Hills Cemetery in Plymouth. In his eulogy at her memorial service, the late Rev. Peter J. Gomes stated, “She labored night and day for the Pilgrims and was one of them in spirit and in fact.  She illuminated a time and a place far removed from us by her skillful and creative scholarship, and, in doing so, she added much light and joy to our own time.”

For sixty years Rose Briggs played a major role in shaping the interpretation of colonial life at the Harlow House. Her influence extended to the techniques used for preparing food at the Pilgrim Breakfast. Many thanks to local historian James W. Baker for sharing the following clipping from around 1957. The newspaper is unknown, but the title says it all: “Fireplace Cooking is Test of Real Culinary ‘Know How’”. The author, Margaret Clark, describes a lesson on making fishcakes from Rose.

Miss Rose T. Briggs of Plymouth is an expert on preparing meals in Pilgrim style, so we asked her for helpful suggestions after we went to the Pilgrim breakfast at the Harlow Old Fort House, Plymouth, and had eaten heartily of the fishcakes she cooks so perfectly in the ancient fireplace.

“Use a kettle well smudged from previous fires,” Miss Briggs recommended. “It is all right to scour the inside but leave the outside sooty, then it won’t smoke when you hang it over the fire.

“Before immersing the fishcakes in the hot cooking oil, I put them in this antique skimmer, so I won’t lose them in the depths of the kettle while they are cooking.

“Fireplaces are dark except where the fire is and it is impossible to see in cooking pots even if you sit down on a chunk of wood the right height, or a stool. We had to improvise a modern fry basket from our old skimmer. Cooks of the period may have used skimmers this way, too, though I haven’t yet found any drawing to authenticate our fry-basket skimmer as has been the case with some of our other improvisations.

“Fireplace cooking has made us realize how sensible the Pilgrim women were to wear caps. When you hang pots on hooks inside a fireplace your topknot goes inside the sooty interior as well as your hangs. If you don’t have a cap on, your hair would look like a hearth broom in no time.” 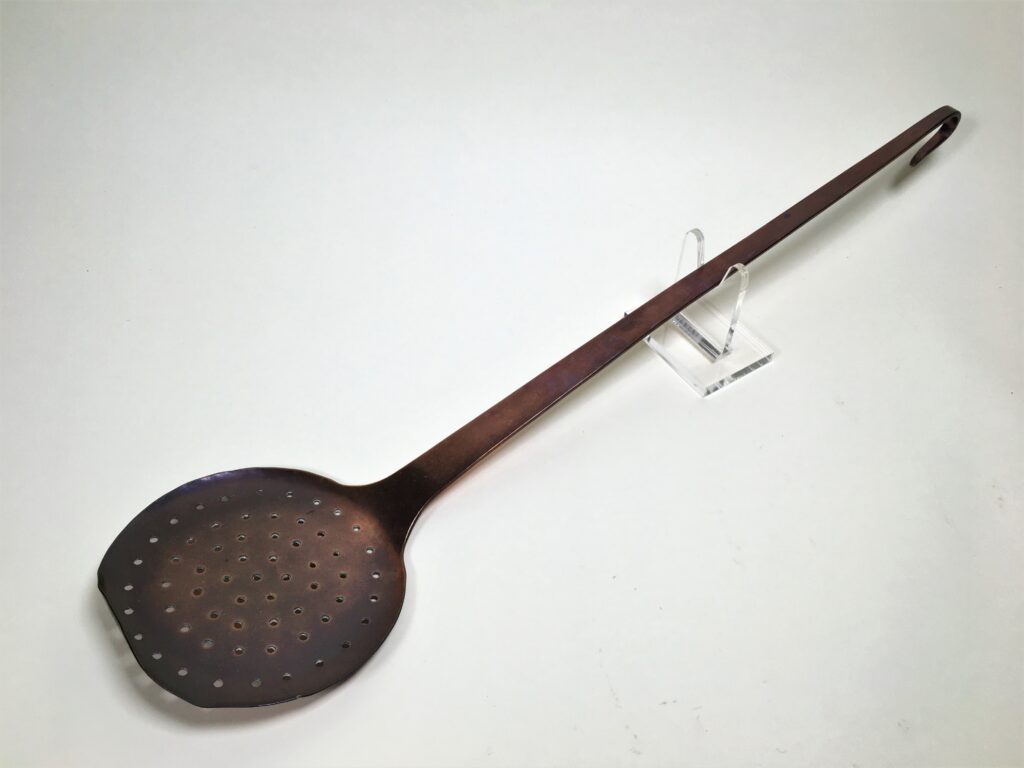 This copper skimmer may be similar to the ones Rose Briggs used when making fishcakes. The handle, which is shaped into a hook at the end for hanging, is 25 ¾” long. The flat pierced “bowl” is 6 ½” wide. (Plymouth Antiquarian Society Collection) 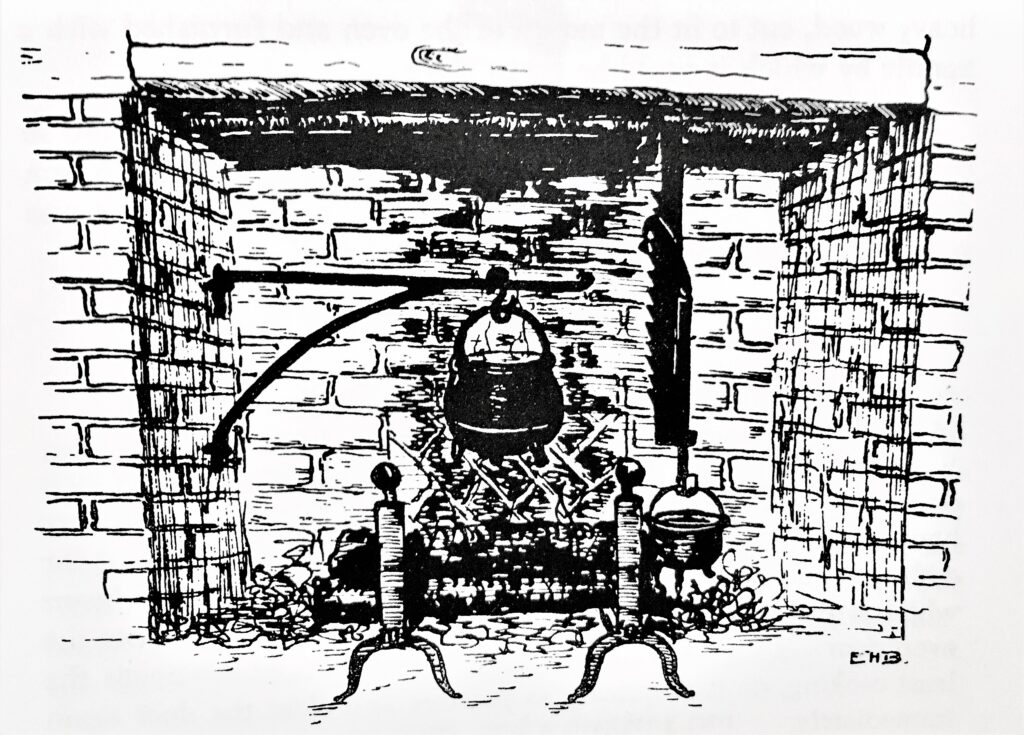 PAS member Ellen Hatch Brewster illustrated The Plimoth Colony Cook Book, which was published by the Antiquarian Society in 1957. This sketch of a colonial hearth shows the crane holding a pot on the left and a trammel on the right. The crane (introduced in the 18th century) could swing in and out, allowing pots to be adjusted away from the fire. The trammel was an adjustable hook, which could be used to raise or lower a pot and therefore adjust the temperature. 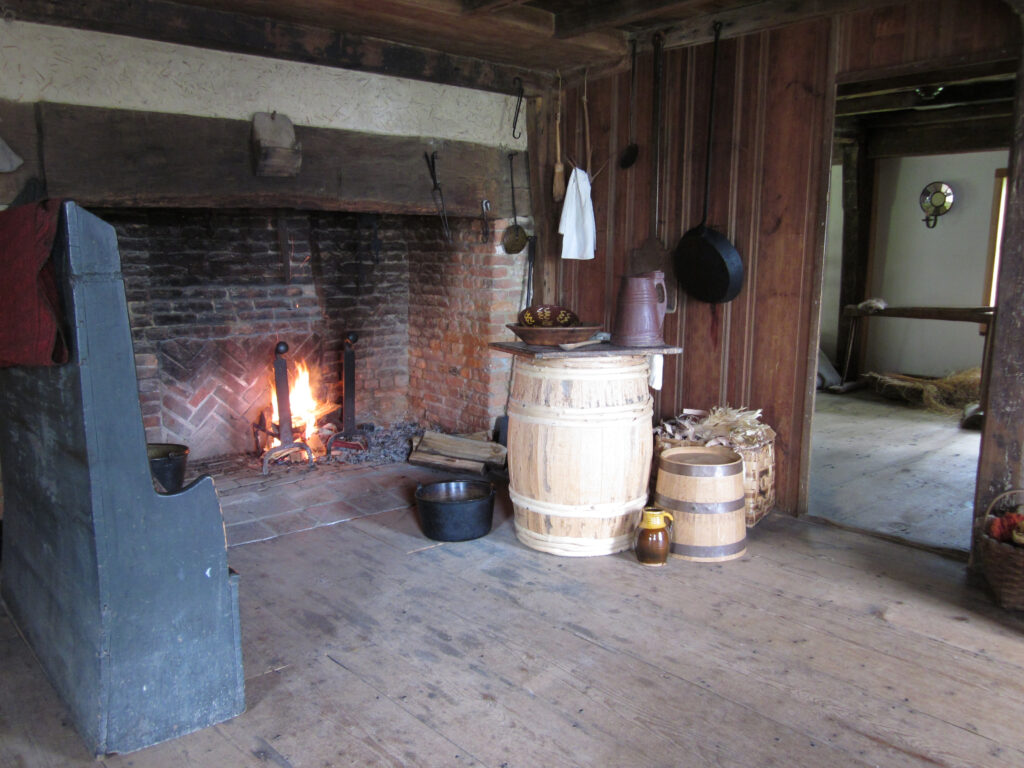 The hearth in the Harlow House as it appears today.